10am, Wed, Nov 14, Olympia — we’re turning in petitions for our $30 Tabs Initiative to the Secretary of State’s offices (520 Union Bldg). This is really exciting!

We called the Sec of State and have an appointment at 10 am, Wed, Nov 14 at their 520 Union Bldg offices in Olympia

We’re turning in our petitions for our $30 Tabs Initiative tomorrow.

I also asked them to assign some State Patrol officers to attend, saying it was “a necessary and prudent precaution” due to the violence by opponents during previous petition turn-ins.  I don’t want this to happen again: 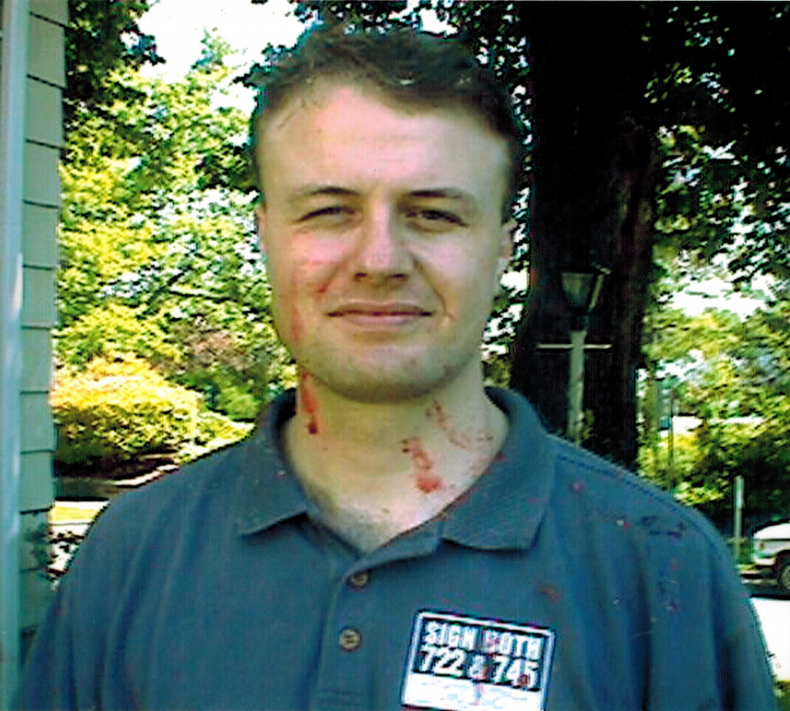 Bob Partlow/The Olympian
Remnants of pie stick to Tim Eyman’s face and neck Wednesday after activists opposed to his initiative unexpectedly smashed two pies in his face on the Capitol Campus.

Protest leaves Eyman with pie on his face

BY BRAD SHANNON, THE OLYMPIAN

OLYMPIA — Two fruit pies were slammed into the face of initiative sponsor Tim Eyman on Wednesday by two unidentified men in the Capitol.  It added a hint of violence Wednesday to what is shaping up as another lively political debate this fall involving Eyman.

Eyman was hit squarely in the face with the pies as he left the Secretary of State’s Office just before noon after dropping off more than 186,000 signatures for his measure.  More than a dozen activists were waiting for him.  The State Patrol is investigating the incident as a misdemeanor assault said Capt. Eric Robertson, the agency’s chief spokesman.

He said one trooper and a trooper cadet were with Eyman, at the request of the Secretary of State’s office, but neither caught the perpetrators, sticking with Eyman instead to be sure he was not hurt.

“Clearly that was assaultive behavior.  It is assault in the fourth degree,” Robertson said.

Eyman said the pie-in-the-face assault crossed the line of free speech.  He said it followed threats on his family by other activists outside his Mukilteo home in March.

Eyman said his vision was blurry a half-hour after the incident.  He said a blood vessel in his eye burst and that he’d see a doctor (more on this is the Seattle PI story below).

“It wasn’t a throw.  It was smashed into my face,” Eyman said.

But Eyman, who vilified politicians at every turn last fall in his victorious campaign to cut car license fees to $30, sidestepped the question when asked if that vilification wasn’t exactly what was happening to him now.

He said his adversaries went over the line of protected free speech — “when they start threatening my family and physically assaulting me.”

SEATTLE PI:  “It was like a punch,” Eyman said after the assault-by-baked-goods.  “They jammed it in, rubbed it in.  Whatever it is, it still burns.”  The doctor from Virginia Mason Hospital in Seattle said Eyman suffered corneal abrasions and chemical burns to his right eye.  “Physical assault isn’t part of the First Amendment,” Eyman said, remnants of pie drying on his neck and shirt.  “The most surprising thing is that our opponents think physical assault is going to swing more people to their side.”  Protesters couldn’t hide their delight.  Cherie Tessier, a protester who was nearby, didn’t see the pie strike but she was laughing as she left the Capitol.  “I think it’s funny.  I think it’s neat really,” she said.  “He’s done damage to people.”

SEATTLE TIMES:  His right eye was blackening, and he said his vision was blurry.  Jim Longley, who helped organize the protest, said “It’s funny, and the guy deserves it when he is being a chicken and he won’t come out and talk the issues with us, and it’s understandable someone might get frustrated with him,” Longley said.

It’s critical that everyone who has signatures — even one signature on a sheet — mail in any and all partially filled and full petitions right away.  NOW.  Immediately.  Two options:

Since the election, we’ve had a huge surge in petitions arriving in the mail.  Thanks to these heroic supporters who recently sent in sigs, we’re turning in our petitions tomorrow:

WE WANT EVERY VOTER WHO SIGNED A PETITION TO HAVE THEIR SIGNATURE COUNT.  So don’t delay, send in everything you got now.

For decades in our state, vehicle owners were forced to pay hundreds and many times thousands of dollars every year to license their vehicles because state and local governments were using a vehicle valuation schedule that artificially inflated the value of our vehicles.  People were furious about skyrocketing car tab taxes.

In 1998, we began what has become a 20 year tug-of-war regarding vehicle registration costs.

The word “persistence” should keep flashing in your mind as you read this:

In 1998, we did a car tab tax initiative, but we fell short by a few thousand signatures.

In 1999, we sponsored I-695, which completely repealed that unfair valuation schedule and set annual vehicle tabs at $30 and required voter approval for any tax increase.  It qualified and passed overwhelmingly.  In March 2000, a Seattle judge said the initiative violated the single subject rule (it was the first time an initiative was rejected by the courts for this reason).  In response, Gov. Gary Locke held a press conference that same day and said, “Regardless of the court’s ruling today, $30 license tabs are here to stay.”  90% of the House and 90% of the Senate passed a bill and Gary Locke signed $30 tabs into law.

In 2002, we sponsored I-776 to again get rid of that dishonest vehicle valuation schedule, repeal local car tab taxes and reinforce $30 tabs.  It qualified and passed.  The court upheld the initiative, rejecting opponents’ many, many legal arguments, including single subject (Seattle PI story:  https://tinyurl.com/y98ofybn).  But a year later, the court brought back the unfair vehicle valuation schedule.

For the next 14 years, everyone’s vehicle registration costs stayed down.  But in recent years, state and local governments have jacked them back up again using the dishonest, unfair vehicle valuation schedule that voters have twice repealed.

Now, this year, in mid-April, we launched Bring Back Our $30 Car Tabs Initiative I-976.  The initiative once and for all repeals the unfair vehicle valuation schedule that artificially inflates the value of our vehicles and sets vehicle tabs, once again, at $30 per year by repealing state and local taxes and other charges imposed on vehicles.  My wife Karen and I sold off our retirement fund and loaned $500,000 to give this initiative every chance to qualify.  That inspired a lot of our supporters to kick in donations and collect signatures in April, May, June, July, Aug, Sept, Oct, & Nov.  Now, tomorrow, we will turn in our signatures for I-976.

Once the initiative qualifies, it will go before the 2019 Legislature.  Thanks to my lawsuit earlier this year (Eyman v Wyman), the Legislature cannot monkey with I-976 (like they did with I-940) which means our $30 Tabs Initiative will automatically appear on the 2019 ballot.  The only question is:  will the Democrat-controlled Legislature want to put an alternative on the ballot (like the itty-bitty Pellicciotti bill that reduces car tab taxes a paltry 5%)?

Regardless, we’re confident that voters want “the real thing”:  $30 vehicle tabs for everyone.  Why?  Because governments are already gouging us with a sky-high sales tax when we buy our vehicles, killing us with a massive gas tax and tolls when we useour vehicles, it’s totally unfair for them to get a third-bite-at-the-apple, hitting us with a huge tax just to own our vehicles.

And besides, the taxpayers have been fighting to get it for 20 years.  I’d say they’ve earned it by now.