Candidate Inslee was emphatic — SEATTLE TIMES, Oct 12, 2012: Inslee says he’ll veto tax increases … after dancing around the question for a while, Inslee made a clear promise to veto tax increases. “I would veto anything that heads the wrong direction and the wrong direction is new taxes in the state of Washington,” Inslee said. The story concludes: After last night, Inslee is solidly on record.

Yes, he really said that.

Is he finished? No way: Inslee continues to lust for a carbon tax (that voters have rejected twice), an income tax (9 times rejected by voters), and a new pay-per-mile tax.

As Governor, I will veto ANY tax increase. The only way Seattle’s Legislature will be able to raise taxes is by overriding my veto which requires a 2/3 legislative vote. Or they can put their tax increase on the ballot and let the voters decide.

Sound familiar? That’s exactly what voters have passed 5 times at the ballot box, the last time in 2012 where it got more votes than any initiative in state history! https://tinyurl.com/MassiveVoteYes 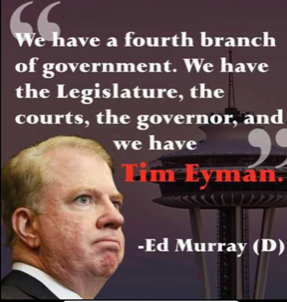 Despite making it very clear what they want, the voters’ will is being stymied by Seattle’s Supreme Court, Seattle’s Legislature, and Seattle’s Governor who all refuse to listen.

So THE ONLY WAY that the voters can protect themselves from higher taxes is by electing a Governor who will listen to the people, respect their vote, and REFUSE to sign into law any tax increase.

Back in early 2013 when Seattle’s newly elected Governor first talked about raising taxes despite his veto pledge, I was scolded and ridiculed for being vulgar and crude when I attacked Inslee for all his tax-talk. I was instructed to apologize. I REFUSED.

Despite all that pressure, I didn’t back down. In fact, I doubled down:

“I believe that Jay Inslee owes us an apology for running on one platform and now implementing a different one, that I think he should simply keep his promise not raise taxes, not allow any taxes to go up” … “I think very clearly the people of this state were promised one thing and they’re getting something radically different.” … “It’s absolutely unacceptable behavior for people to lie their way into office,” Eyman insisted. “I’m simply trying to highlight the press is giving him a pass, not repeatedly bringing it up and highlighting the fact that he’s repeatedly doing things that are different from what he said in the campaign.” A spokesman for Inslee said his office would not comment on Eyman.

It feels right to me. What do you think?

As your Governor, I will listen to and abide by the will of the people and only allow tax increases to become law with a 2/3 legislative vote or majority popular vote. And there will NEVER be a carbon tax, income tax, or pay-per-mile tax as long as I’m in office.

I make you this promise: support me in this effort and I’ll give you a race for governor like you’ve never seen before.