Absolutely fantastic folks joined me in Olympia for our $30 Tabs Rally:

Many were first timers attending a political event:

People from all over, including Centralia, Renton, Texas (!!), Eatonville, and Shelton:

Terry earned an iconic $30 Tabs t-shirt for traveling the furthest to attend (Alaska!):

Everyone got a signed $30 tabs sticker: 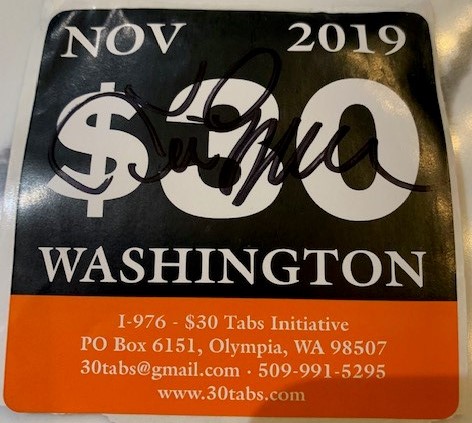 And make sure to watch KING 5’s short clip too (“Why should we believe a kangaroo court in King County?”):
https://www.youtube.com/watch?v=B-hq_OazNdw

It was a great day with great people fighting for a great cause: protecting democracy and our $30 Tabs.

Everyone is absolutely furious with AG Bob Ferguson for intentionally sabotaging the defense of I-976 — we’re stuck in King County’s kangaroo court because Ferguson refused to change venue or affidavit this Jay Inslee appointed judge.

This new lawsuit leapfrogs in front of King County by one week.

So on Jan 31 a Thurston County judge will rule while King County’s kangaroo court hearing isn’t until Feb 7.

This new case — Eyman v State of WA — is a motion for declaratory judgement on I-976 (specifically on the single subject rule and the Attorney General’s ballot title’s compliance with the Constitution). You can read it here:
https://permanentoffense.com/wp-content/uploads/2019/12/final-Eyman-v-WA-Motion-for-Dec-Judgement.pdf

Unlike the AG’s feeble and deficient defense, this lawsuit and legal brief on I-976 make it clear that all of its’ provisions involved “limiting state and local taxes, fees, and other charges related to vehicles” and that the AG’s ballot title and information in the voters pamphlet fully informed voters.

It’s ridiculous to say voters were confused (like the judge did). It’s insulting to call voters stupid (like Jay Inslee did). And it’s just plain dumb to not see that Bob Ferguson is purposely sabotaging I-976’s defense.

Voters have every right to be angry. The pigs at the trough want you to forget about this and move on.

That’s why it’s absolutely critical to keep fighting back. Persistence is essential to overcome such tyranny.