The History of our Taxpayer Protection Initiatives will inspire you.

It was 2005. It was the legislative session right after Chris Gregoire took the election from Dino Rossi in the 2004 race for governor. After taking office, what was her top priority? Gutting Initiative 601. That measure, passed by voters in 1993, protected taxpayers by putting a strict limit on the growth of government spending and requiring a 2/3 vote of the Legislature to raise taxes. But during that 2005 session, the Democrats radically changed I-601’s spending cap formula to effectively put no limit on the growth of government spending.

And the 2/3 requirement was eliminated.

Fast forward to 2007. We sponsored an initiative to reinstate the 2/3-vote-requirement for the Legislature to raise taxes. With significant help from good friend and superhero-benefactor Mike Dunmire, we qualified Initiative 960 for the fall ballot.

Opponents filed a lawsuit to block the people from voting on it, butthe supreme court unanimously rejected it.

We ran our typical no-advertisement, free media campaign while opponents spent millions against us. In November, voters passed I-960.

Democrat Senator Lisa Brown immediately filed a lawsuit to overturn the initiative, but the supreme court unanimously rejected it.

So for the next two years, the 2/3 vote requirement was in effect. The 2008 and 2009 legislatures were controlled by tax-loving Democrats.  And the unsustainable spending and huge tax hikes from the 2005 session had created a massive bow wave of government growth that was unsustainable even in a good economy. And during that time, the economy wasn’t good at all … it was horrible. In the fall of 2008, the economy crashed and the recession hit. The Democrats’ bow wave of government spending far outpaced the tax revenues coming in. And like a bunch of Pavlovian dogs, the Democrats automatically looked to the taxpayers to bail them out.

Nonetheless, the Legislature didn’t raise a single tax. Not one. Why? Because the 2/3-vote-requirement was in effect.

If not for I-960’s protections, those two legislative sessions would’ve been a tax-hiking nightmare. An income tax would’ve been a certainty. Billions in tax increases? Absolutely. We’ll never know how many billions of dollars we saved taxpayers with I-960 but we know it was a lot.

But the state Constitution allows the Legislature to change initiatives after two years. So before the 2010 session started, powerful labor unions publicly threatened Democrats: raise taxes or else we won’t fund your campaigns in November. The Democrats fell in line. Senate Majority Leader Lisa Brown said it’d be priority number one. House Speaker Frank Chopp promised it’d be their top priority.

The first bill Governor Gregoire signed into law was the repeal of the 2/3 requirement. I expressed my displeasure at the bill signing: 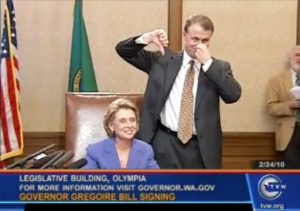 After that, the Democrats went hog-wild, imposing $6.7 billion in higher taxes. Voters were furious.

Anticipating their repeal of the 2/3 requirement, we filed an initiative (I-1053) in January 2010 to reinstate the 2/3. But the horrible economy had hit our friend Mike Dunmire really hard, forcing him to stay on the sidelines that year (and, it turned out, in subsequent years too).

We were on our own.

So, starting in late April of 2010, I began loaning money from a 2ndmortgage on my family’s home to kickstart the paid signature drive (if I hadn’t done that, the costs would’ve skyrocketed, making qualification financially impossible, and that would’ve meant the Democrats’ betrayal going unchallenged). With that seed money from me and my family, we eventually raised enough additional money from others to qualify for the ballot. But just barely. By the time the signatures were turned in, I-1053 qualified but I was stuck with a $250,000 debt. It was brutal. But the good news was the initiative qualified, so we proceeded with the fall campaign. Opponents spent big bucks, but the voters were livid that the Democrats had raised so many taxes.

In November 2010, I-1053 got 64% of the vote, passing in all 39 counties, including Seattle-dominated King County. Voters also rejected Bill Gates’ income tax initiative and passed the soda-tax-repeal initiative. Gov. Gregoire’s later said, “three strikes you’re out,” meaning the voters’ message was clear: no new taxes.

So the Legislature didn’t raise taxes in 2011 and 2012. We had succeeded at putting them in a straight-jacket. During that time, the taxpayers were protected.

Nonetheless, we knew the Democrats would take it away again. So in 2012, we sponsored an initiative (I-1185) to reinforce the 2/3 requirement. Despite the tremendous difficulty in raising money for a 2/3 initiative when the 2/3 was still in effect, we still managed to get it qualified. We ran another low-budget fall campaign and opponents spent millions against us. Despite that, I-1185 passed,getting more votes than any initiative in state history: nearly 1.9 million voters. That’s more voters than Obama got, more voters than Inslee got. 64% of voters said yes. And thanks to our supporters’ donations in 2011 and 2012, we raised enough to pay off my $250,000 loan from 2010. So after six years of tremendous effort and huge risks, we had succeeded at protecting the taxpayers.

But like in Star Wars, the Empire struck back.

In February 2013, the state supreme court reversed 20 years of legal precedent and multiple court rulings and overturned the 2/3 requirement. The protection that the voters had repeatedly approved was taken away.

Some will say that we were unsuccessful because our three 2/3 initiatives during those six years didn’t last forever. But I know that’s not true. We protected the taxpayers during a critical time in our state’s history. A time when the Democrats were salivating at the chance to exploit the economic crisis to impose a radical tax-hiking agenda. Washington would be an absolute hell-hole of over-taxation if we hadn’t sponsored and voters hadn’t passed those 2/3 initiatives during those crucial years.

Looking back, I’m struck by the tremendous challenges we faced. There was never any guarantee of success at any time. Passing one initiative is tough enough, but qualifying and passing three, all while carrying a $250,000 debt, is a miracle. Only through God’s good graces and sheer force of will did we get the job done.

Much of my inspiration to bring back our $30 tabs with Initiative 976 comes from the miraculous success we had with our 2/3’s initiatives. The decision by Karen and me to sell off our retirement fund to loan $500K to kick-start I-976 comes from my faith in our supporters to be there for me like you’ve been there for me before.

For over two decades, against all odds, we’ve scraped and scratched and clawed to protect taxpayers from the government’s insatiable tax appetite. And the only reason we’ve succeeded is because people like you stood with me and stood by me. That’s what I’m asking you to do with Initiative 1082, Term Limits for Taxes, Round 2.

#Round2 puts those dirty dog politicians in Olympia on a short leash when they take our money without asking.

GET A BUNCH OF PETITIONS
AND DIVE RIGHT IN