It’s not over — the fight continues!

I hired our attorney Stephen Pidgeon to write and file a motion for reconsideration with the state supreme court on their absurd $30 Tabs ruling.

In it, he repeatedly reminds those 9 judges about the well-reasoned ruling by King County Superior Court Judge Marshall Ferguson who, after nearly 8 hours of oral argument, came to the obvious conclusion that all the provisions in the initiative were germane to one another and had rational unity (single subject) and he found nothing wrong with the description (ballot title).

Steve did a phenomenal job — you can read it yourself here: 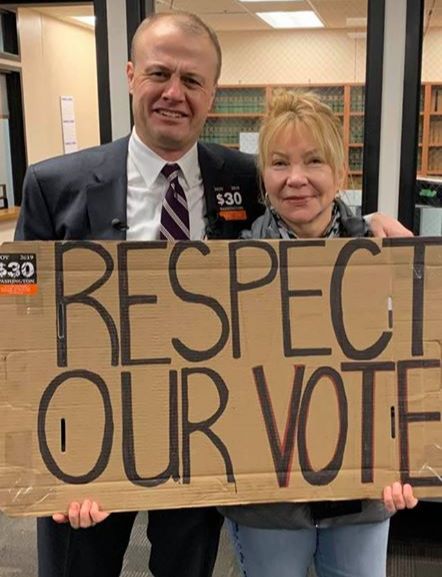 I ask each of you to communicate directly with all 9 judges and tell them to read it, absorb it, and rule in favor of it.

In the “To:” line of your email to them, COPY AND PASTE this:

In the Subject line, COPY AND PASTE this:

All 9 of you ignored King County Superior Court Judge Marshall Ferguson’s well-reasoned ruling upholding Initiative 976. Read this motion for reconsideration, absorb it, and rule in favor of it.

In the body of the email, COPY AND PASTE this (or write something yourself, tell them how you feel about their absurd ruling):

Yesterday, the people filed a motion for reconsideration on your original decision on our $30 Tabs Initiative. All 9 of you ignored King County Superior Court Judge Marshall Ferguson’s well-reasoned ruling upholding it. I demand that you read (maybe for the first time) his decision (https://tinyurl.com/976CourtRuling).

With such an overwhelming vote in favor of the initiative (60% statewide, not counting Seattle) and such overwhelming opposition to your original ruling (KOMO: DO YOU AGREE WITH THE COURT’S UNCONSTITUTIONAL RULING OF $30 CAR TABS? 30% YES, 70% NO), I demand that all 9 of you read this motion for reconsideration and give it the attention it deserves 983208_Motion_20201104163902SC811245_8545.pdf.

With all 9 of you, anything goes for liberal initiatives (KIRO: “Supreme Court dismisses lawsuit against anti-gun initiative I-1639”). But we all know it’s totally different with conservative initiatives. It’s not supposed to be that way. When an initiative is approved by voters, judges are required to bend-over-backwards to uphold them — initiatives, and legislative laws, are assumed to be constitutional and there’s a very heavy burden to prove they’re not. And any time a law or description can be read and construed and interpreted more than one way, a judge must read it, construe it, and interpret it in the way that upholds it (Judge Ferguson did that, not one of you did).

All 9 of you claimed that one section of I-976 — Section 12 — didn’t have anything to do with limiting vehicle taxes and thus was a “2nd subject”.

But look at the specific language of Section 12: “In order to effectuate (definition of effectuate: “to put into force, carry out, achieve”) the policies, purposes, and intent of this act and to ensure that the motor vehicle excise taxes repealed by this act are no longer imposed or collected, an authority that imposes a motor vehicle excise tax under RCW 81.104.160 (right now, that’s only Sound Transit but this policy would have affected any other government imposing a tax under this statute) must fully retire, defease, or refinance any outstanding bonds.”

This language is clear and unambiguous — Section 12 was included “to carry out” the elimination of Sound Transit’s dishonest, inaccurate, artificially inflated car tab tax.

King County Judge Marshall Ferguson’s ruling clearly explained why Section 12 was included and necessary (pages 13-17 & 23): “Section 12 is germane to the general subject of motor vehicle fees and taxes because it is intended to ensure that one type of repealed motor vehicle tax, the special MVET levied and collected by Sound Transit, is no longer collected. Section 12 accomplishes this by requiring that bonds repaid by special MVET revenues must be retired early, defeased, or refinanced. A prior initiative measure, I-776, attempted to eliminate Sound Transit’s authority to collect special MVET by repealing RCW 81.104.160 without requiring bond retirement. The Washington Supreme Court ultimately held such repeal unconstitutional because it impaired contracts between Sound Transit and its bondholders by eliminating the tax revenues pledged for bond debt repayment. In the present case, by making the elimination of Sound Transit’s authority to levy and collect its special MVET contingent upon Sound Transit’s ability to retire, defease, or refinance its outstanding bonds, Section 12 of I-976 is a mechanism to avoid the unconstitutional flaw the Supreme Court identified in Pierce County II. … Section 12 is a necessary precursor to the repeal of MVET tax authority … Since Section 12 is necessary to implement Sections 10 and 11 (which repeal Sound Transit’s car tab tax), both of which are germane to the general subject of motor vehicle taxes and fees, Section 12 is likewise germane to the same general subject. … all of I-976’s provisions operate in a coordinated, conjunctive way to serve a unified legislative goal of repealing, reducing, or removing authority to impose motor vehicle fees and taxes. They are germane to each other and to I-976’s general subject. … Section 12 is necessary to achieve the repeal of the special MVET … as such, Section 12’s impact upon existing bonds is directly related to facilitating the tax repeals and reductions.”

In your original decision, you even acknowledged that Section 12 was needed:

“Sections 10 and 11 (that repeal Sound Transit’s car tab taxes) come into effect only if Sound Transit can lawfully retire, defease, or refinance the bonds.” (page 11)

Yet despite acknowledging this clear nexus and connection, all 9 of you went on to ignore it:

“Section 12, which requires Sound Transit to retire, defease, or refinance bonds, is not germane to limiting vehicle taxes and fees … section 12 is an unconstitutional second subject.” (page 16)

It’s maddening, truly maddening, that the voters have clearly demanded $30 tabs — for the 3rd time — and yet all 9 of you took it away by ignoring your oath of office, ignoring Judge Ferguson’s well-reasoned ruling, and ignoring I-976’s clear language.

Here’s your chance to remedy your mistake.

BALLOT TITLE: Judge Ferguson’s ruling, pages 19-23, clearly explained there was nothing wrong with the ballot title: “Like the single-subject rule, the subject-in-title rule is to be liberally construed in favor of the legislation. At the preliminary injunction phase of this case, this Court concluded that Plaintiffs were likely to prevail on their subject-in-title claim. Now, upon consideration of the parties’ additional arguments and authorities, the Court concludes the Plaintiffs have failed to satisfy their heavy burden of establishing a violation of Article II, section 19. The ballot title does not mislead … Nowhere does the ‘voter-approved charges’ exception identify with specificity which ‘charges’ would be allowed to exceed the $30 annual limit. Ultimately, a plain reading of I-976’s ballot title indicates to an inquiring mind the scope and purpose of the initiative, and gives notice that would lead to an inquiry into the body of the act. Voters wondering whether their favored local fee or tax would survive I-976 would have received no assurance either way from the ballot title. … Liberally construing I-976’s ballot title in favor of the initiative, as the Court must, the Court concludes that is satisfies the subject-in-title rule. Since the first clause of I-976’s ballot title makes clear that certain fees and taxes would be repealed or removed, the second clause does not mislead by indicating that non-specified ‘voter-approved charges’ would exceed the $30 limit.”

It’s never too late to do the right thing. And the right thing is reconsidering your original decision on Initiative 976. I ask you to read Judge Ferguson’s decision (maybe for the first time) upholding our $30 Tabs and ask you to come to the same logical conclusion he did.

SEND THEM YOUR EMAIL RIGHT AWAY. Forward this email to friends and family and co-workers. Share this on social media and encourage everyone to email them too.

This is why the AG’s lawsuit asks for a lifetime ban on all my future political activity.

The AG’s attacks on me and my family over the past 8 years have been brutal. I really need your help to survive this. Please donate to my legal defense fund here:

In addition, we worked really hard on our $30 Tabs Initiative.

We got I-976 qualified, passed, and upheld by that King County Judge (it’s still on hold because of the AG’s sabotage). Karen and I sacrificed a lot — we sold off our retirement fund and loaned $500K to kickstart its signature drive.