The Long Road To $30 Tabs — Check Out Our Victories And Our Challenges.

Here we are celebrating the qualification of I-976 for the November 2019 ballot: 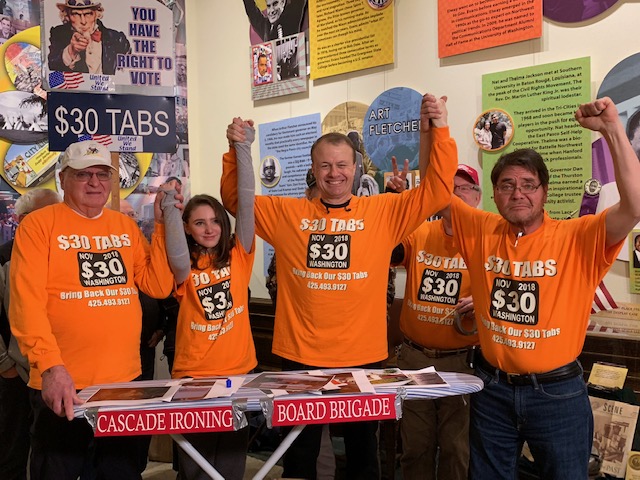 Here’s how we got here:

* In 1999, we sponsored “$30 License Tab Initiative” I-695. It replaced the dishonest vehicle valuation scheme with a flat, fair, and reasonable $30 annual fee and required voter approval for any tax or fee increase by state and local governments. It qualified, it passed. Court ruled 2 subjects. Gov. Gary Locke and Democrat-controlled Legislature repealed the state car tab tax but left in place the dishonest valuation scheme that Sound Transit uses.

* So in 2002, we sponsored “$30 Tabs for Everyone” I-776. It repealed the remaining 1/3 of the state car tab tax, repealed vehicle fees imposed by local govts, repealed again the dishonest valuation schedule, and repealed Sound Transit’s authority to impose a car tab tax. It qualified, it passed. Opponents sued and the supreme court, in Litigation Round 1(Pierce County v State of Washington), rejected their legal challenge on multiple fronts:

1. SINGLE SUBJECT: Opponents “failed to show” that “I-776 required the people to cast a single vote on two unrelated, proposed laws.”
2. BALLOT TITLE: Opponents have not “met their burden” to show “I-776’s ballot title failed to notify … the public of the subject matter of the measure.”
3. BOND IMPAIRMENT: “… we cannot conclude that I-776 “substantially impair[ed] King County’s contractual relationship with its bondholders.”
4. LOCAL HOME RULE: Opponents “contend that I-776 violates precepts of local home rule … The argument lacks merit. Article XI, section 12 permits the state to legislate what taxes and fees local governments are allowed to impose. The legislature or the people legislating by initiative may rescind by general laws the authority previously granted.”
5. INITIATIVE SCOPE: “Sound Transit argues that, in repealing the MVET, I-776 exceeded the scope of the initiative power. … As a general law repealing an existing general law, I-776 does not exceed the scope of the people’s constitutionally granted initiative power.”
6. DUE PROCESS RIGHTS: “Sound Transit suggests that I-776 … violated the transit agency’s due process rights … The claimed deprivation of ‘life, liberty, or property’ caused by I-776 presupposes that, when a local government decides to embark on a public project, the people of that jurisdiction acquire a vested property right in the completion of the project, regardless of subsequent state law. No authority exists for that proposition. … Sound Transit has no basis for asserting that I-776 caused a deprivation of a vested property right.
7. In sum, Pierce County and Sound Transit are unable to establish beyond a reasonable doubt that I-776 violated constitutional precepts of local home rule, exceeded the scope of the initiative power, or deprived the voters of a vested property right.”

As a result of I-695, the 2000 Legislature, I-776, and Litigation Round 1, the state car tab tax was fully repealed and the authority for local governments to impose taxes and fees on vehicles was repealed.

It was a clean slate.

So then I-776 went through Litigation Round 2 regarding Sound Transit and its bonds.

In their eventual ruling, the Supreme Court reiterated that the Sound Transit car tab tax was repealed. But as long as the car-tab-tax-backed-bonds were outstanding (as long as they existed), the tax would continue to be imposed. And the Supreme Court said that since I-776 did not require Sound Transit to retire its bonds early, the court would not require them to do so.

Since then, state government, local governments, and Sound Transit have created and imposed new taxes and fees on vehicles and they continue to use the dishonest vehicle valuation system which voters have repeatedly repealed.

Which brings us to Initiative 976 which reflects the policy and legal precedents from all those previous battles. I-976 repeals the vehicle taxes and fees imposed by state and local governments since our previous initiatives passed. I-976 repeals the dishonest vehicle valuation system for the 3rd time. And I-976 specifically requires Sound Transit to retire, defease, or refinance their car-tab-tax-backed bonds so that the bonds will no longer be outstanding (allowing the already repealed tax to stop being imposed).

Why did I spend so much time detailing this?

#Round2 puts those dirty dog politicians in Olympia on a short leash when they take our money without asking.

GET A BUNCH OF PETITIONS
AND DIVE RIGHT IN