THIS SHOULD INSPIRE EVERYONE: 88 years young super-supporter Bob Henkel from Tacoma collected and turned in 6500+ signatures for $30 Tabs Initiative — did I mention this amazing, heroic man only has the use of one arm?

I love this man: 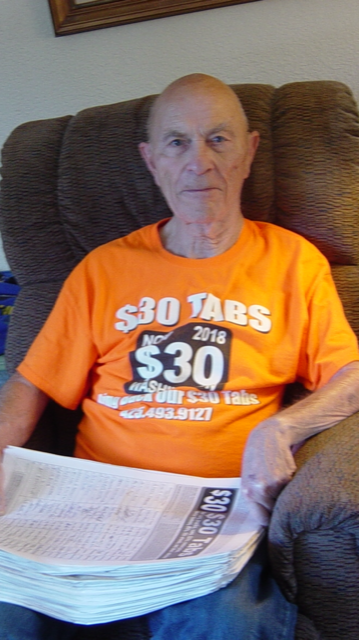 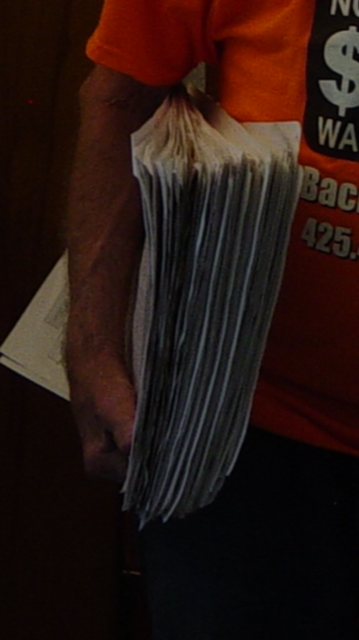 Since mid-April, Bob Henkel from Tacoma has been busting his butt getting signatures for the $30 Tabs Initiative I-976.  He’s now collected and turned in 6500+ and he’s still going strong.  Those pictures show him with his 320+ petition sheets.

He visited nearly 100 businesses in a 30 mile radius of his home, asked them to put petitions on their counters, and he drives around once or twice a week picking up filled petitions and replacing them with blank ones.  That kind of creativity and perseverance is truly inspiring!!

Bob’s hard work that should inspire everyone.

20 years ago, in 1999, we turned in 514,000 voter signatures from our first $30 tabs initiative I-695.  Amazingly, 180 men and women were responsible for half those signatures.  Bob was one them — we affectionately called these 180 people our “kamikazes” (politically incorrect even then).  Each of these 180 heroes was sent an ugly gray 695 t-shirt as a reward for their service.  To this day, at political events, I run into these people and I always ask them:  “Do you still have your gray shirt?”  The response I always get:  “Darn right I do!”

Bob Henkel is an extraordinary man who has been on the front lines fighting for all of us for over 20 years.

I asked him why he’s doing this.  Here’s what he had to say:  “I’m working on Initiative 976 because we’re all getting ripped off by Sound Transit.  It’s a corrupt, lying, cheating organization.  The $30 Tabs Initiative, to me, is a chance to revote on ST3.  We need this initiative to hold Sound Transit accountable for their lies.”