TOTALLY ILLEGAL: Government itself is using tax dollars to directly fund the No976 campaign. Will the AG prosecute? Ya, right! I-976 only way to fight government dishonesty & lawlessness

Toby Nixon: “This mailer is absolutely, positively, without a doubt, a blatant violation of state law.”

Check out what landed in mailboxes yesterday: 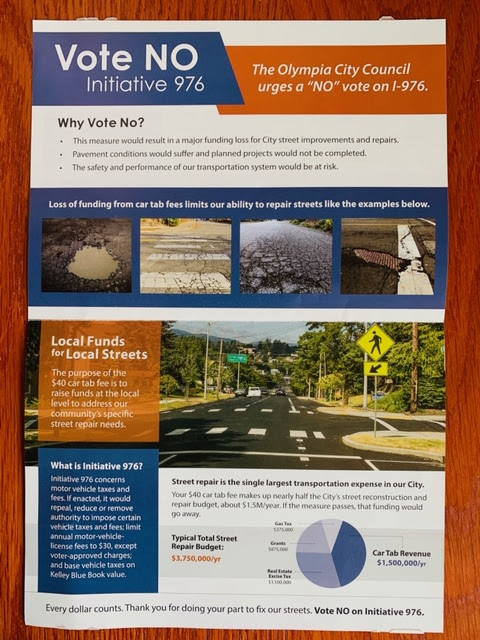 Last week, Toby Nixon posted this: “RCW 42.17A.555 is a broad prohibition on using public resources for campaigning. Not even ‘de minimis’ use for campaigning is allowed – not even a paper clip or an email.” — https://app.leg.wa.gov/RCW/default.aspx?cite=42.17A.555

For months, the pigs have been indirectly spending tax dollars on their dishonest ads against I-976 (FYI – the Skagit Valley Bridge got knocked down by an oversized semi-truck, not low car tabs). Here’s how taxpayers are indirectly paying for those ads: Sound Transit spends billions helping Big Business and Big Labor. And then Big Business and Big Labor turn around and “donate” to the No campaign. That’s netted them $4 million+.

But it seems $4 million isn’t getting the job done.

From today’s Seattle Times: “Stating ‘vote no’ is ‘express advocacy,’ Nixon added later. ‘The PDC should throw the book at them and their attorney should be fired.'”

I don’t buy it for a second. No lawyer gave this mailer the green light. They knew this was illegal but they did it anyway.

For them, keeping this dishonest tax justifies illegal behavior.

Reject dishonest taxes and dishonest government and vote yes on I-976.