Because of you and your emails and your participation and our attendance at yesterday’s hearing in Olympia, the visceral opposition to this additional tax was clearly expressed.

For those who can’t access that video, a few minutes beforehand, I wrote out my testimony: 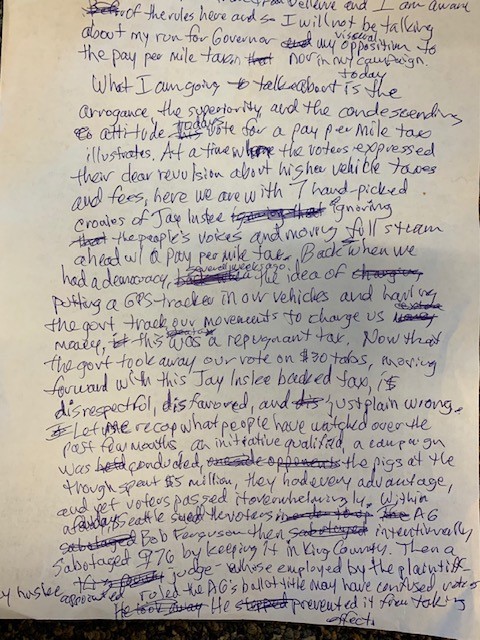 As Governor, I will veto ANY tax increase – Lyin’ Jay will sign every one (despite promising to veto taxes, in 8 years, he’s imposed 29 tax hikes costing us $50.6B). There will NEVER be a carbon tax, income tax, or pay-per-mile tax as long as I’m in office – you’ll get all three if Lyin’ Jay gets 4 more years.

And it’s not just taxes. Our basic constitutional rights — our right to free speech, political expression, our faith, our fundamental right to personal protection, our right to personal privacy — are under constant attack in Washington state by Jay Inslee and Bob Ferguson. Jay and Bob don’t represent us, only Seattle. By a 5 to 1 ratio, non-Seattle overwhelmingly votes to bring back our $30 Tabs, Seattle says no (https://tinyurl.com/30TabsWinWith5to1Ratio). Jay Inslee calls voters stupid and sides with Seattle. Bob Ferguson intentionally sabotages I-976 and refuses to affidavit the Jay Inslee appointed judge and refuses to move the case out of that downtown Seattle courtroom despite Seattle being the plaintiff! Because of Bob, the judge agreed with Jay Inslee that voters may have been “confused”.

At least Stalin stuffed the ballot box to win his elections. Here, they took away democracy despite a 5 to 1 voter victory.

For 21 years, I’ve done everything I could to give the average taxpayer an equal voice in the process. Working together with an amazing team of heroes, we’ve qualified 17 initiatives and voters passed 11. We’ve saved taxpayers $43B. It’s an amazing track record of success that is due to our persistence and junkyard dog determination.

But none of these efforts would’ve been needed if the people we elected were representing us. Jay Inslee is not. Bob Ferguson is not. We deserve better. Voters will have a clear choice. Join me and let’s make history together.