Polls close @8pm, but no need to wait: I formally declare victory NOW on our 3 tax advisory votes.

Polls close @8pm, but no need to wait: I formally declare victory NOW on our 3 tax advisory votes. Voters got to learn about & vote on 3 tax hikes. 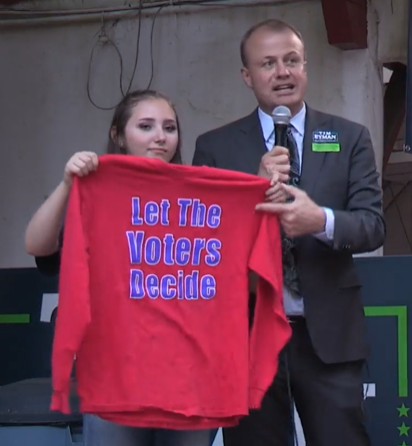 The powerful, the press, and the politicians hate ’em — of course they do — it is their mission to keep secret how much the government takes from you.

In the voters pamphlet and on the ballot this year, it lists every time Jay Inslee broke his repeated promise to veto any tax increase.

And voters get to vote on each tax increase that the Legislature unilaterally imposed and blocked from a citizen referendum by slapping an emergency clause on it.

When politicians whine about voters calling them and asking them about tax advisory votes, I have to laugh. That’s called voter feedback and that’s what you say you want.

Politicians often say “I’m proud of how I voted – I’m not afraid to defend my votes” – OK, that’s exactly what you’re getting – not from 20 people who may attend a town hall meeting or a handful of people who call your office.

But with tax advisory votes, you get to hear from every single voter in the state of Washington and specifically ALL the voters in your district.

Because regardless of the eventual vote totals, every voter in Washington – thanks to the voters pamphlet and the ballot – got to learn which taxes were raised, how much they’ll cost, and which legislators helped Jay Inslee break (again) his veto-any-tax-increase-promise.

Join me tonight at 7pm – I’ll be at the Bellevue Hyatt at Suite near the Wintergarden room (same place we were for I-976 in 2019). I’d love to meet you, shake your hand, and thank you for supporting our initiative efforts over the years.

While I’m fighting to help our state and our nation with my initiative efforts, help me fight back against Fascist Fergie by donating to my legal defense fund so I can appeal the AG’s ridiculously unconstitutional restrictions on the First Amendment: