Bob Ferguson is a Cowardly Bully

Bob Ferguson is a cowardly bully. Using unlimited government resources going after political adversaries is easy. I choose to challenge the powerful.

This will be my 23rd year utilizing the initiative process to let the voters decide on protecting themselves from excessive taxation.

It is immensely challenging.

Facing full-throated opposition from politicians and the press and all the institutions of government, our team strives to design initiatives that can make it through that brutal gauntlet while relying on the voluntary support of regular citizens.

Voluntary financial assistance, voluntary collection of voter signatures, voluntary signing of petitions, and voluntary votes in favor of our initiatives. And without exception, our opponents — funded directly or indirectly by the taxpayers — radically outspend us. And when we win (which we do more often than not), the government uses our tax money to hire government lawyers to sue the voters while we have to privately fundraise for our attorneys to counter the AG:

It is incredibly difficult and that’s why I do it.

It’s David versus Goliath every time. 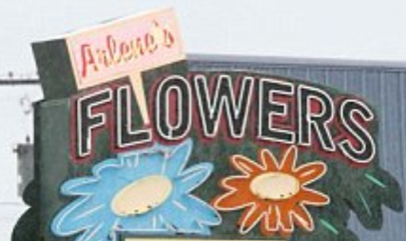 Taxpayers are forced to pay for his salary, the salaries for his 1000+ lawyers and staff in his office, and his PR machine.

He then uses those lawsuits for himself:

And then he personally profits from it:

And taxpayers pay for all of it. There’s nothing voluntary about it.

It’s Goliath versus David every time.

For 22 years, I’ve been working with thousands of heroic citizens to put initiatives on the ballot for voters to vote on. Together, we’ve qualified 17 statewide initiatives for a public vote. 11 were approved by voters. They’ve saved taxpayers over $46 billion directly (lower car tabs, lower property taxes, etc). Billions more were saved indirectly by deterring tax increases, especially in those years when our 2/3-vote-for-raising-taxes initiatives were in effect.

This has infuriated the Democrats who control the legislature, the Governor’s office, the courts, and the pigs at the trough. 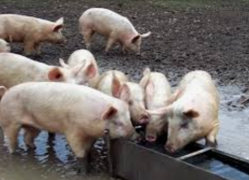 The government’s 8 years of investigation / litigation / trial / persecution has been about trying to get me to throw in the towel by targeting me, my family, and my supporters — to get all of us to give up.

It had the opposite effect.

As I said to the Seattle Times (July 7, 2018): “What I know is that State Attorney General Bob Ferguson is trying to drive me out of politics, permanently,” Eyman said. “So you know what my reaction to that is? It’s to become as politically active as I have ever been in my life.”

In 2018, Karen and I sold off our retirement fund and used it to help the signature drive for the $30 Tabs Initiative.

In Nov 2018, the costs of the litigation got so bad I was forced to file for bankruptcy.

The AG repeatedly interrogated me (often without an attorney), my family, and my friends.

In 2020, I ran for Governor, defended I-976, repeatedly sued Inslee for his destructive lockdown, and promoted numerous conservative projects and candidates.

A year ago, during mandatory arbitration, the AG’s office made it clear their priority was getting me to “voluntarily” agree to a lifetime ban on my future political activity. It’s never been about the money, it’s always been about ending our pro-taxpayer, pro-liberty, pro-family, limited-government initiative campaigns.

It was blackmail and I refused to do it.

But I wasn’t going to survive the AG’s attacks without help.

Fortunately, thousands of you responded to my pleas for assistance and voluntarily helped me and my family.

As witness Larry Jensen said on the stand: “I helped Tim because I felt sorry for him for what the State was doing to him and his family.”

Thanks to Larry and thousands of friends and supporters like him over the past 8 years, we made it to trial.

It cost me everything I had. All the money I earned in my lifetime, all the money I raised in the past 8 years, it’s all gone. The process became the punishment.

But Bully Bob wasn’t satisfied with that. He demanded unprecedented fines and ridiculously unconstitutional restrictions on my First Amendment rights.

The judge rubber-stamped the AG and imposed a $2.6 million fine because I didn’t report the “campaign contributions” I’d received. But as my attorney Richard Sanders explained, none of them were for a campaign and therefore weren’t reportable:

Today, the judge will decide if he’ll rubber-stamp the AG again and impose even more costs on me: 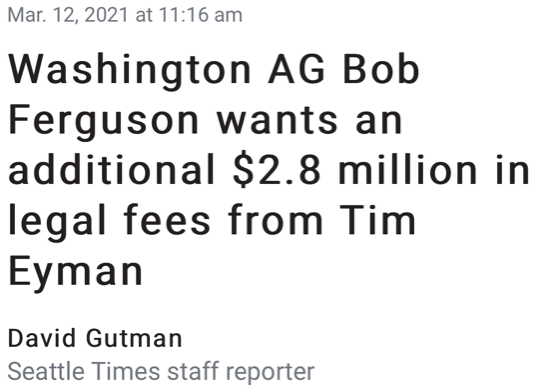 Fascist Fergie’s PR machine is no doubt primed to pump out another press release promoting himself on it.

Whether the final number is $2.6 million or $5.4 million, I am committed to appealing this because I know I didn’t do anything wrong. Our professional treasurer Stan Long knew my friends and family were supporting me and he made the correct decision to not include them on campaign reports because the law only requires reporting of “campaign contributions” and none of them were.

And I know I am a person, not a political committee, and it is an unconstitutional violation of my First Amendment rights to restrict me as if I were.

And I know if Bully Bob gets away with it with me, you could be next.

To move forward, I really need your help. Please donate to my legal defense fund so I can keep fighting back against Bully Bob:

We’re asking folks to donate to our PAC so Tim can get his loan to our PAC paid back. And your donations will also help stop Inslee’s Income Tax and Carbon Tax Schemes with the initiatives we’re co-sponsoring with Tim.